The posters promoting any creative scene can become more iconic than the artists themselves. This is true of Liverpool’s Sean Wars whose distinct style has attracted attention to the local and national DIY scene for a number of years. His stark, dramatic and darkly funny artwork has become as celebrated as any of the bands, and heavily in demand.

What was your experience of art growing up?
I drew on anything and everything I could get my hands on, and I didn’t like going outside. I used to hope for rain in school so I could stay inside and draw. Art GCSE was one of the handful I scraped a mark in, but once I got to A Level the written element was so uninspiring I quickly lost all interest.

What determined your style and the materials you use?
My first few years of poster making were awful, I was making horrid digital art riddled with “grunge” fonts. It took me a while to start drawing on paper again, and really finding my style. The majority of my art is still made using paper, pens, an A3 scanner and MS Paint. I’ve learned to get along fine with pretty basic materials.

Does your music influence the art?
Not so much the music, more the DIY ethos – I can do what I want and it’s fine and it doesn’t matter if people like it. I like to think I use colour in art whereas I use noise in music. The passion is more important than the end result, even though the end result is still important. Luckily, I’ve never been asked to exhibit outside of DIY art spaces with good ethics, but always do a bit of research anyway before agreeing to exhibitions or gigs. 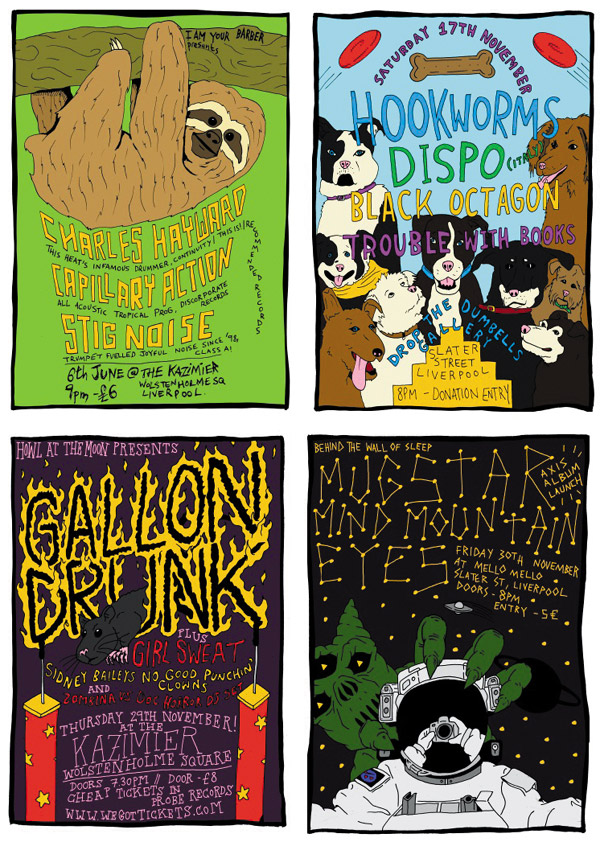 How does feedback differ between art and music?
I’ve always found it easier to get people to look at a picture than go to a gig with any of my (usually very loud) bands playing. People are more vocal at gigs if they don’t like what you’re doing; feedback on posters mostly comes from people asking you to do more.

Do you feel artwork can define eras in music?
Yes, but I don’t know if that’s the number of interesting artists who are involved. Prolific artists can come to determine a scene’s aesthetic or style, especially within DIY scenes. I think that they both feed into each other, with bands and artists both affected by the history of a genre and making a choice whether to adopt clichés or abandon them.

How is the relationship between your artwork and music changing over time?
Hopefully I’m getting better at both, but at the same time the responsibility of adult life eats away at the time to do either so it’s a balancing act. No part of me thinks I’m going to make a career out of art or music, which allows me to just carry on doing whatever I want with both. I very much doubt I’m ever going to be doing gig posters for Taylor Swift tours, though I’d be a liar if I said I wouldn’t. 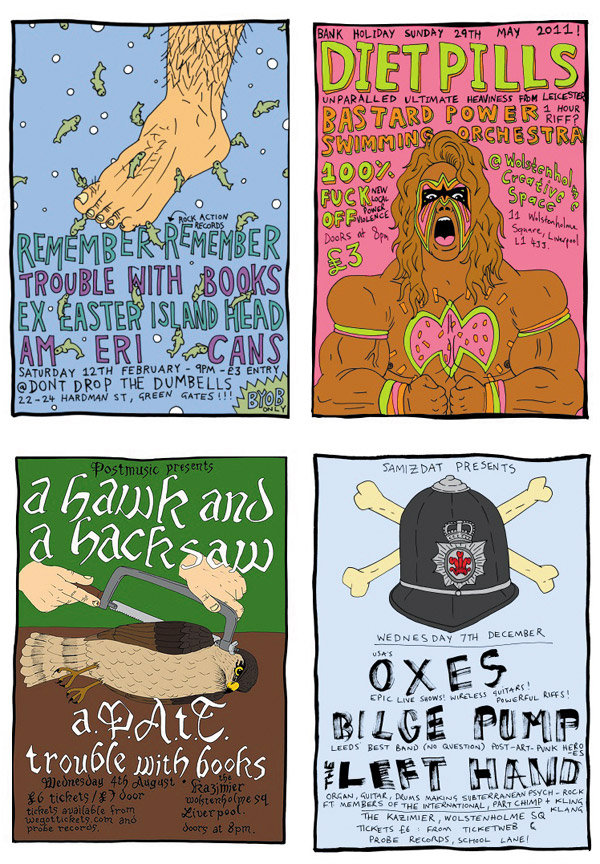 Previous Post: Tales From The One-Eyed Town
Next Post: Kurdish Woman beating the hell out of ISIS – The revolution in Rojava