After a visit to the Great Homer Street Market, Janet McCusker remembers what it used to be like when she worked there in the 60’s.

I visited Great Homer Street Market the other week, it was the first time I had been there in years. The weather when I had set out was warm with the sun shining, by the time I arrived the heavens had opened pouring sleet and rain and it was blowing a gale. I took shelter in the indoor market, oh how times had changed -there were various stalls selling their wares but most interesting was the falseness of everything, false hair, false nails, false lashes, even knickers with false bums in! And then the bling – diamanté studded personalised cases for your iPhone or iPad with Swarovski elements of course, feathery fascinators for ladies day, glamorous skimpy dresses fit for any desperate scousewife. Nicos stall of Big Fat Gypsy Wedding fame selling dresses in miniature for little girls.

Then I remembered the Paddy’s market I knew from when I was a 15 year old girl starting a Saturday job just a few days after the advent of the 50p piece and pre decimalisation it was 1969 my job was working in a pork butchers on Great Homer Street. The butchers shop was housed in a three storey double fronted building opposite scores of bustling stalls and the original indoor market. I wore a blue check overall not unlike my summer school uniform, covered by a white cotton apron, I remember taking it home to wash every week and how murky the water was, my mum used to say you could make a pan of soup out of it. There where two sides to the shop one side was the pork side and everything pig, and I mean everything for along with the pork joints and chops, there were the ribs, shanks, bacon, sausage, trotters and tails and all the offal, even huge whole heads. And then there was still the dreaded pigs stomach I say dreaded because before making it to the counter these stomachs were stored in two huge wooden barrels of brine, if you were unlucky enough to be late then your job for the day would be to turn these slimy things inside out shifting them from one barrel to another, your hands would turn blue with cold. I did this once, I was never late again. The other side of the shop had a longer counter and sold cooked meats along with all that was lamb, beef and rabbit. I despaired of being asked for rabbit as they were sold whole and I hated touching them, everything we sold had to be weighed, I hated serving ox tails too, they were massive and hung over the scales, these tails put me off oxtail soup for years. We sold cooked chickens hot and steaming, now that was a job for if you arrived early to work, you would climb the narrow staircase feeling the heat becoming more intense with each rising step. The stairs led to where all the ovens where, the smell was absolutely amazing as whole hams, sides of beef, pork joints, chickens and hearts cooked away. My job would be to baste the chickens and meat and to stuff the lambs hearts with sage and onion after removing the tubes and ventricles with a sharp pair of scissors. When the meat or chicken was ready I would place the heavy enamelled trays of cooked fayre into the dumb waiter sending it steaming downstairs into the shop, it’s arrival always heralded by the ding of a bell. 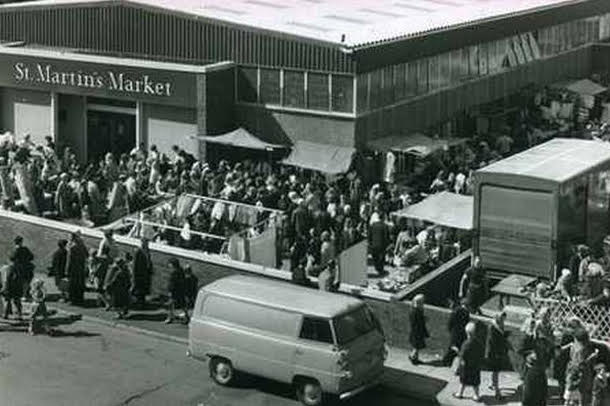 It was a great job in the winter being upstairs but not so good in the heat of the summer when windows would be thrown open for relief to no avail, I would rather be in the shop serving then and that by any means was no mean feat, there were no calcu- lators everything had to be added up as you were serving then the total rang in by pressing the big round buttons on the till, it was very hard work but my friend Linda and I enjoyed it especially going over to the market when we closed for dinner at 1. If Joe our boss was in a good mood he would give us a sub or our wages early and we would buy ourselves a new lipstick or a pair of tights sometimes even a new mini skirt or top from one of the many stalls, if we had time we would enter the indoor market which was full of tables ladened heavy with second hand clothes and shoes, each manned by women with heavy hooped gold earrings and sovereign heavy fingers, wearing fur coats and smiling rosy red cheeks, smoking ciggies and donning headscarves hiding curlers, each wearing an embroidered pinny with pockets for their money and all who collectively didn’t seem to have any teeth! If you did spot a tooth it would usually be clad in gold!

We would hurry back over the road and have to fight our way back in to the shop past queues of women waiting for the door to be open at 2. I have never known a shop like it, you never had a lull in customers, every Saturday was like a Christmas Eve there were always ladies clutching their purses waiting to be served, we were exhausted by the time we finished at 4.30. any cooked meats that had already been sliced would be shared amongst the girls and I loved taking boiled ham and roast pork home to my mum. The tiredness didn’t last long a quick wash and change and I would be off to my boyfriends house knowing I still smelled of cooked meat and chickens, he never said I did I just thought if did. I was to ask him years later if I did and he said he had never noticed the Imperial Leather and lashings of Taboo must have masked it well.

Just a few of my memories of Paddy’s Market and Great Homer Street when life seemed simple and you had to add up in your head.