Massive Attack will be performing a low carbon gig in Liverpool planned for October 2020. It is part of the Good Business Festival working with the Tyndall Centre for Climate Change Research at the University of Manchester.

The Good Business Festival 6-8 October 2020 aims to engage the “power of business to effect positive change”. A climate where social and environmental impact are vital measures of success.

BBC Radio 4 on December 30 2019 was guest edited by environmental activist Greta Thunberg. One of the features, 1 hour and 20 minutes in, was an interview about the low carbon Massive Attack gig in Liverpool. 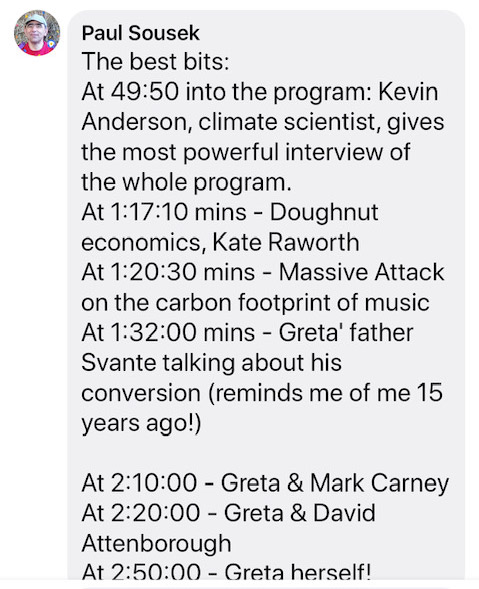 “The music industry is no different to any other in that it has to change it’s behaviour fast, but as you know it isn’t and because of it’s huge social influence and emotional resonance you can argue it has an even greater responsibility to change. So the fact that we’re not doing much about it is pretty glaring.

One of the main things is working with responsible corporate partnerships. It’s great that gigs have that ability to convey a message but if you then are partnering with corporate identities that are also less than sort of like clean on their environmental records and also are potentially financial institutions that are backing fossil fuel institutions then what kind of message does that send out?

We’re working with Liverpool council authority, they’re going to close car parks for the day which is quite a big thing to do in terms of local politics how that’s going to go down. We’re working with an electric bus company, we’re going to look at all the energy being renewable and obviously the power we create will go back to the grid so we’re hoping to create a legacy, a green infrastructure which can then power future gigs.

I’d like to think that we are a very creative industry. If we can show that through this Tyndall report and we can share this Tyndall report and through this gig we can show that there are many solutions to the problems we are now sort of facing. We won’t have to completely stop touring, that we can just change the model of our business more responsibly, I mean next year we plan to travel to Europe solely by train with the band, the crew and all our gear”.

More details about the Low Carbon Massive Attack show will be announced later.

The Good Business festival are organisers of the gig along with Tyndall Centre: http://www.thegoodbusinessfestival.com/

Previous Post: The True Hours of Work and Income of a Deliveroo Courier in Liverpool
Next Post: Beija Flo’s ‘Inside The Walls’ Exhibition