Feature by Lisa Worth on the sculpture ‘The Knife Angel’, created by artist Alfie Bradley to draw attention to the impact of knife crime.

Artist Alfie Bradley has seen enough of knife crime to understand the impact. His best friend was stabbed outside a club in the market town of Oswestry, resulting in 49 stitches and a punctured lung.

His arresting sculpture ‘The Knife Angel’ is currently on show outside Liverpool Anglican Cathedral and it has been applauded for the powerful message it conveys.

Alfie said: “I hope to shock the youth and others into realising the consequences of using a weapon, and the damage it causes families.”

According to the Office of National Statistics, there has been a 12% increase in knife related crime in the year leading to June 2018 (not including Greater Manchester, where there was a technical issue with the data). 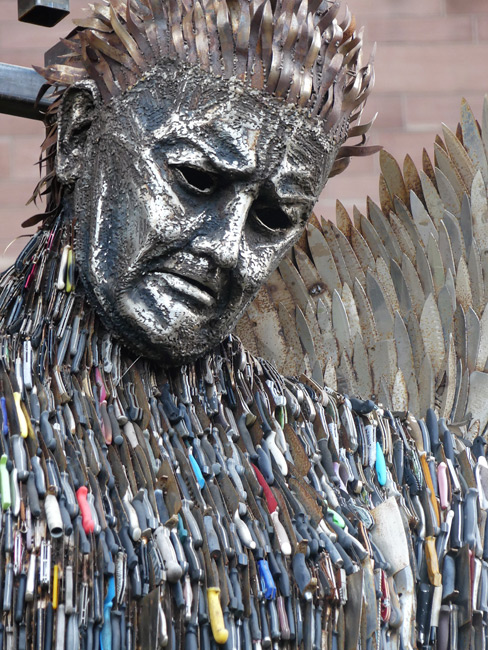 In Merseyside the police recorded 945 serious incidents in the financial year 2017/18, and statistics suggest that the peak age for carrying knives is between 13 and 17.

Police forces have got behind this artistic statement as they grapple with the epidemic, donating the one thousand knives used to make the 27 ft angel. All the weapons have been seized by the police or given in during amnesties from across the UK.

The sculpture was earmarked for exhibition in Trafalgar Square, London, highlighting this national crisis, but controversially London mayor Sadiq Khan vetoed the plan citing commissioning criteria as a reason.

Dave Streak, a tourist from Milton Keynes, made a point of going to view the sculpture during his trip after seeing it on TV.

He said: “I think it’s amazing, and we do need to do more about knife crime. It’s everywhere, too many youngsters dying. If this helps to get that message out, then great! It’s brilliant to see anyway.” 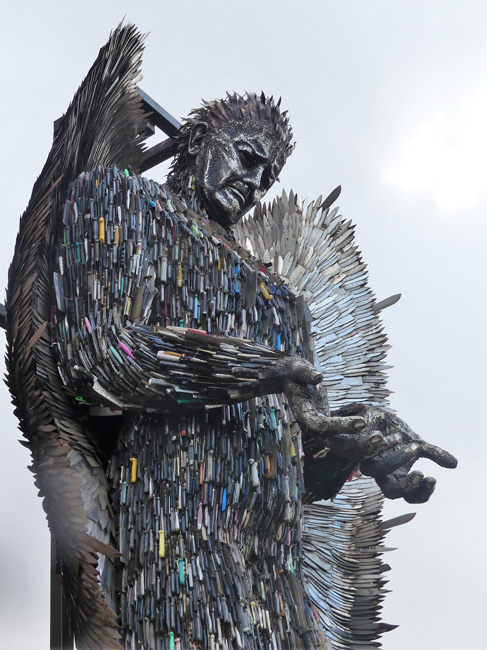 Born in London, Alife moved to France when he was three-years-old, eventually studying stone cutting and sculpting. He moved back to the UK when he was 23 and found a job in Shropshire where he could pursue metal sculpting.

He said: “Art is the best form of expressing any message, when it’s done in the correct way. No matter what social class or life status [of the viewer].”

The sculpture will be on display until January, when it will be taken on tour around the UK