Review and interview by Joe Coventry

Joao Marcus Rosa came to Liverpool as part of the Brazilica Festival 2016. He was pleased to be here with his exhibition of stunning photographs concerned with capturing the changing biodiversity and ecosystems of his native Brazil.

What we get is a snapshot of the exotic birds, animals, fish, trees, plant life and the wider environmental contexts in which they still thrive. He has taken pictures all over the massive continent-size country which has seven distinct ecosystems, all of which are under threat.

For example, 93% of the Atlantic Rain Forest and over 20% of the Amazon region have been cleared in the interests of economic expediency. It is not hard to imagine the effects on habitats and all endemic species of such activity. Joao’s aim is to preserve for posterity the wonder of this increasingly disappearing world.

If their habitats dwindle, so does the flora. Plants like the Pau Santo (Red Plant), Araucaria or Pink Trumpet tree amongst them. Whether National Parks, Rainforests, whole regions, river deltas or islands captured from the air, wide angle lens, telephoto close up or quick-fire technique, Rosa’s contribution is as vital as ever in recording these changes.

I caught up with the affable 37-year-old after seeing the exhibition to ask him why he is so passionate about his work and how he sees the future, over a cup of coffee in the Small Cinema’s Courtyard Cafe. He was enjoying his chance to add another side to the samba infused Brazilian Week while taking in the sights and sounds of the city.

To set the scene: Had he ever been to Liverpool or the UK before?

London yes, but this city, no. Invited to show his photographs in St Georges Hall he was very happy to exhibit at the iconic venue.

Was the size of his show all that he wanted?

The 20 works on display where a fair representation of what he wanted on display so he was happy enough. The constraints of gallery space, lighting, curatorial imperatives (Alicia Bastos hung the show), print size, budgets; all had to be weighed in the balance but the narrative and content of the 20 prints on display carried the message he wanted to put across.

Was he continuing a tradition of photographers looking to capture the vanishing world in Brazil?

Not really. It was never seen as a problem, which was a surprise. Only now are people becoming increasingly concerned with the exponential environmental costs of deforestation, the rise of the bio-fuel industry, increased cattle ranching and big agriculture. Influencing Government policy was part of generating an awareness of what is taking place. This was central to what he was trying to do but in such a vast country with many jurisdictions to overcome, it’s not an easy task to influence the powers that be. Nevertheless his shots of wildlife and the delicately balanced environments in which they are increasingly under threat now contributes an important input into changing the collective mindset.

Who then were the inspirational figures that got him started?

Having always lived close to nature, as a child his grandfather introduced him to the art form. At university his degree in journalism helped him in taking his pictures to a more professional level; so he became a freelance photographer taking commissions, as well as building on his own passion to capture what was around him.

The conversation then moved on to whether the images captured were driven more by the aesthetic or political considerations of a photograph.

So, for instance, does an image in National Geographic carry the same connotations or message as if it was used by Greenpeace?

Joao says he uses the beauty of a photograph to convince and inspire others to take note about what is going on around them. The image is also intended to make politicians think critically about what is happening on their watch. More than anything he wants people to leave the comfort zones of their concrete jungles and go and explore for themselves what is taking place in the countryside habitats around them. (A simple comparison here, is the diminishing native red squirrel population in Formby Woods not far from Liverpool).

Taking pictures for a serious photographer involves a lot of hard work and planning to succeed; and sometimes danger.

How arduous and dangerous is it to capture your intended images? Is there a dedicated team involved? How do you know where to look?

Yes, concedes Joao, a lot of research and local knowledge is needed before even stepping up to the plate. To get close enough to snap a wild animal teamwork is vital. It also takes a lot of patience in cramped conditions to get the best shot and on occasion courage, too. Safety is high on the agenda but so to is maximising your exertions.

The savannah regions of the Cerrado Ecosystem, where he lives, are the places he loves to photograph above all else. It is common scrubland but home to many of his best shots. It is now under threat because people are increasingly abusing it. Beware, he contends, if this buffer zone between raw nature and ‘civilisation’ goes do not be surprised at what turns up at your front door.

Does he always get the best shot? How often does he fail?

Philosophically, like life in general, you can achieve perfection only rarely, he muses. Lots of things can get in the way; logistics as much as anything else. Time scales, bureaucracy, finance, weather. All you can do is try and try again. The important thing is to try to create and get a positive message across in his photographs. If it encourages others to take up the likes of ecotourism and bring money into local economies, so much the better.

Who does he admire amongst his contemporaries?

No specific individuals, but the network of like-minded souls around the world fighting to overcome indifference and bring awareness to what is overtaking everything from environmental degradation up to global warming. Magnanimously, he says, he constitutes only one grain of sand struggling against the tide.

Surely more than that.

An hour is nearly up so there is just time to ask a few more questions. 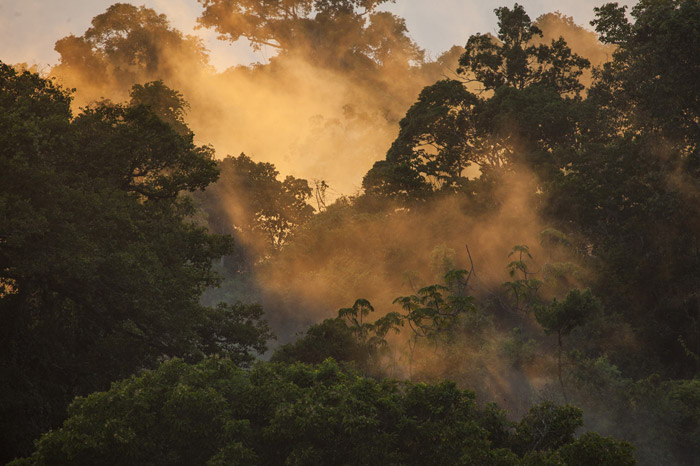 Has he worked with Alicia before?

No, but she has worked promoting Brazilian culture in this country for 18 years. After this short preview show the exhibition continues at the Horniman Museum in London until January 2017.

Finally what does Joao do to relax in his spare time?

He likes nothing better than going into the living , breathing countryside with his wife Ana Paula and his two year old son Benjamin. That is when he is not swimming in the lake nearby his home. Now after six weeks away it is nearly time for him to reacquaint himself with his family and the place he loves.

All that’s left to say is thanks and good luck with his next venture.