Given the current political situation in Catalonia, Katy Brown was keen to find out the thoughts of those on the ground during a recent trip to the region. She interviewed three people living in Catalonia who identify as anarchists for their thoughts on Catalan independence from Spain…

Name: Oriol
Political affinity: anarcho-independentist – we have our own flag!
From: Catalonia
Nationality: Catalan

How do you feel about the prospect of independence?
I think it could be a very nice way to empower the population and for decentralisation of the state. It could also be a tool for changing the rules of the EU, in terms of resisting obligations to the EU. Also the motives are very clear, Spain is acting as when General Franco was in power, the ideology has become more fascist that in any moment previously in Spain´s democracy and this is intolerable.

Do you think independence alone is enough to realise your political ideals?
No, because independence alone is nothing, we need to create a new country which takes into account the beliefs of the majority of the population and this is very challenging. In Catalonia we also have our internal issues – some big companies have been linked to political corruption scandals and this also has to be eradicated. My most pessimistic point of view is that Catalonia will never be able to have its own government as Spain and the EU will not allow it through the use of forceful measures and we will need to start a revolution more similar to the revolution in Kurdistan. 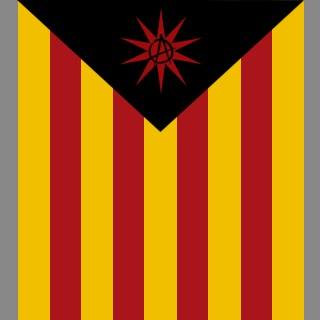 How do you feel about the prospect of independence?
On the one hand I feel happy that this is happening because if people in Catalonia are fighting for this then maybe this can lead to them fighting for other things. On the other hand I think there is not enough self-criticism about the state´s structure. There has been no opportunity to vote for a Catalonia with no state. There was the option of voting for Catalonia to be part of Spain or a separate state, there was no option of voting for an independent Catalonia with no state, though as things are now I don´t know if we are ready to run a territory with no state in this part of Europe.
It´s good that Catalonia gets out of Spain as Spain is a very oppressive state and has been for the last 80 years, since the second republic. Also because of the language, with independence Catalan will be more present. It was previously forbidden to speak Catalan for over 40 years as with other regional languages in Spain.

Does Catalonia want to leave the EU?
Catalonia will benefit from remaining in the EU and the president has declared that Catalonia has always felt part of the EU and some politicians have stated a clear desire to remain in the EU.

What would prevent independence from making Catalonia as progressive as you would wish?
The politicians promise a modern state, from what I have seen of northern countries I don´t really like it – it disempowers people. The welfare state makes people too comfortable, it alienates people and breaks down communities and makes people reliant on the state so they won´t make their own structures.

How are things politically, on the ground, in terms of the independent movement?
There is a very big grassroots politicial party, the CUP, which is based on municipalism, feminism, communism/socialism, lots of people from grassroots movements are in this party which for example, doesn´t want an independent Catalonia to have its own army. Lots of anarchists and libertarians are in this party. So there are people who are anarcho-independentists who have voted on this occasion and worked with supporting the referendum and helping it happen.
Then there´s the conservative political party in power, now called PEDECAT but formerly the CIU (it changed its name due to a number of scandals), this is a nationalist right wing party in Catalonia with a lot of rich people interested in independence for economic reasons – Catalonia is a rich region, the 2nd richest in Spain. This party wants an independent Catalonia to have its own army.

Has the independence movement in Catalonia inspired other autonomous regions in Spain to want independence?
I think there has been a lack of good strategy in terms of communicating with other regions around how they are oppressed by the Spanish state so now they are not in support of Catalan independence, the fight for independence has been inward looking somehow.

How do you feel about the prospect of independence?
At first I wasn´t too involved and didn´t see the possibility of the process doing much to change the status quo or current social paradigm so I wasn´t that interested, I was for the right to vote but I wasn´t strongly for or against but since I´ve seen that it´s not only a political thing orchestrated from the political elite, but has big social back up I am quite for it. Anything that weakens the state structure I am for and this might be a chance to do that.

What reservations do you have?
I think that mainstream parties have been blaming the Spanish government and scapegoating them for the state of Catalonia when it´s the Catalan government that has put in place the cuts – which have led to social problems and big student protests – because the conservative government promoted cuts in education and healthcare which led to lots of protest – and now they want a makeover.

What gives you hope?
The hopes are that some parties and people are pushing for a constituent process – people deciding what the new state would look like and what structures – not just the minority left is asking for this. The main conservative party hasn´t said much about it but that could be a chance for some real change. Also if the mobilisation and activeness that people have right now can be chanelled into grassroots movements that would be great. The CUP is a great party working horizontally, centred in a decentralised way of understanding politics, it promotes people getting involved in their own cities so you have a more empowered sense in your own living place. The grassroots is empowering people and making people active so there´s a chance of that party making some real change with one foot on the streets, one foot in the institutions – their goal is not just to take power , they see the value of being in power at the same time as taking down the system so that in the meantime we can change some neoliberal policies to make some improvements for the better in the short-term.
So there is a chance for more people getting into active politics and this gives me hope, but we have to work really hard. It´s a good chance to change the paradigm of just voting when there´s elections and building stronger communities. We need to ride the wave and say ´look we´ve gone out on the streets and accomplished independence so we can do so much more’, including smaller changes in our own communities.