Saturday’s BLM march through Liverpool was a morale booster to those who want to see an end to racism and injustice. When you link this with protests world-wide it shows a rising confidence that a real shift in society is about to occur.

The series of big demonstrations and actions sparked by the execution of George Floyd, have highlighted, once again, that for all our ‘leaders’ rhetoric about the freedom of democracy, inequality is institutional, and therefore protestors spontaneous anger at establishment injustice is completely understandable.

BAME people have always borne the brunt of a society built on inequality. Now they are at the sharp end again after years of ‘austerity’ and privatisation which leaves public services unable to cope with a health crisis. The concerted response from people on the ground of “we’re not having this!” has forced the Tories to think again, but only their removal will bring an end to incompetence and nepotism. 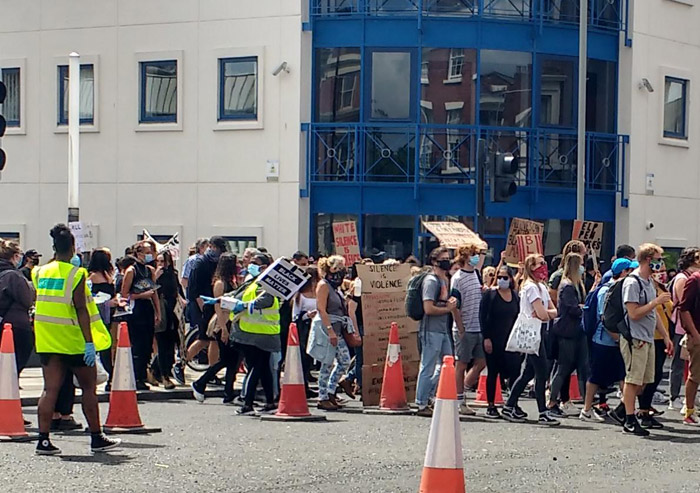 Meanwhile, in a break from witch-hunting members, Labour leader, ‘Sir’ Keir, condemned protestors for pulling down the statue of a slave trader. In a contradictory statement he said it was “completely wrong” for Colston to be ‘put in the dock’ while saying in the same statement that this emblem of slavery should have been removed “a long time ago”!

Starmer’s activity (or lack of it) since he became Labour leader is indicative of Labour’s adherence to establishment norms, and shows a disconnection with grass-root feelings. Is there any point in getting the Tories out if they’re replaced by Labour’s ‘Blairite’ bunch, other than the ephemeral pleasure of seeing the back of Johnson and his cronies? Or that, maybe, we’ll get a more caring capitalism with the same structural disparity?

People are ‘voting with their feet’, demanding an end to injustice and generating change themselves. They won’t be relying on an increasingly irrelevant Labour Party getting it through the ‘Old Boy’ network of Parliamentary procedure.